Raoul Barre was an early prominent figure in the animation field. Barre opened his first cartoon studio months before Bray opened his; alas, Barre's efforts to maintain his studio were futile. Barre moonlighted at the Bray Studios while working for others as well - such as the Edison studio, for whom he produced a well-known series called The Animated Grouch Chasers. Barre would later work on Felix the Cat and other series throughout the silent era. 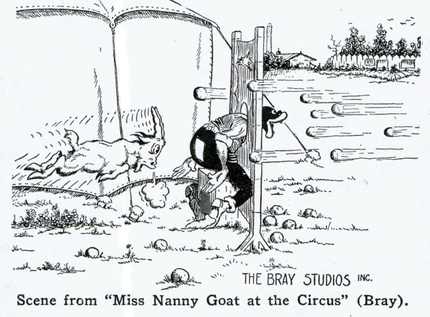 Miss Nanny Goat was a sporadic, short-lived series directed by Clarence Rigby. Rigby was a comic artist in the early 20th century and had worked on strips like Toyland (1900-1902). Very little is known about how Rigby became involved with Bray and what story - if any - lies behind the creation of his goat character. Sadly, none of the three Nanny Goat cartoons are currently known to exist.
An interesting anecdote from the series' production is that one of the shorts was filmed twice. A contemporary press piece stated that "static, the cameraman's hoodoo, ruined an entire release of the Paramount-Bray Animated Cartoons. So disastrous were its effects in the J. R. Bray studios that it necessitated changes in the releases of the Paramount programme for two weeks. Miss Nanny Goat on the Rampage was the ruined film. It was the work of Clarence Rigby, and it goes without saying that the accident 'got his goat.' It will not be shown now until May 18th. The original release for the later date, The Police Dog in the Park by C. T. Anderson, has been transferred to fill 'Miss Nanny's' place."

Left: Period advertisement for Miss Nanny Goat at the Circus

The Plastiques were a series of shorts featuring plaster models, animated with the stop motion technique. The series was directed and animated by artist Ashley Miller; alas, little is currently known to us about the artist or the series. 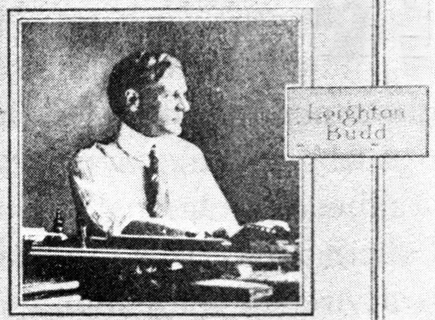 One of the less prolific Bray Studios directors, Leighton Budd produced 18 cartoons at Bray between 1916 and 1919. Nearly all of Budd's animated shorts were political in theme, inspired by topical news items relating to World War I.
In an interview conducted by historian Mark Langer*, J. R. Bray reminisced about Budd and his work at the studio. Bray opined that alcoholism dogged the early animation business, and his staff was no exception to the trend. Bray claimed that in the mid-1910s, he had a room with four animators and they were all "drunks." Budd in particular suffered from alcoholism; Bray called him unreliable and his animation work crude—perhaps the result of working while intoxicated.
Paul Bray Jr., J. R.'s grandson and later studio president, remembered that the studio paid employees on Mondays simply to ensure that they came in to work. In those days of animator alcoholism, staffers might otherwise have been more likely to stay home, nursing hangovers!
Sadly, none of Leighton Budd's cartoons have yet surfaced for this project.
*Mark Langer's "John Randolph Bray: Pioneering Animator" in American silent film: discovering marginalized voices (Gregg Bachman and Thomas J. Slater, eds.; Southern Illinois University Press, 2002) 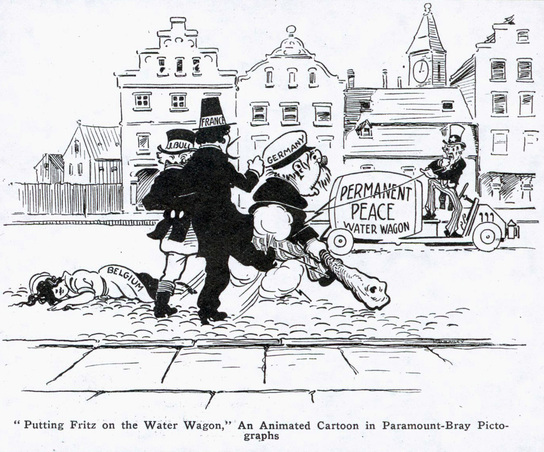 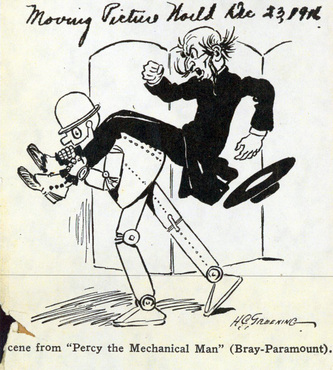 Sam Loyd directed this obscure Bray cartoon series. A period newspaper piece explains that Loyd would present a puzzle of sorts in each film, then offer a due date by which theater patrons were to solve it - and send their solutions to Loyd by postal mail. Contestants who solved the puzzle correctly - and made Loyd's deadline - were rewarded with a "very handsome puzzle book." There are currently no known surviving samples of the Picto-Puzzles.

Burt Gillett toiled as a Bray staffer in 1920—and perhaps, uncredited, earlier and later as well. Gillett's credited Bray work was on the Shenanigan Kids series, a Hearst property, as well as the lesser-known Lampoons. Little is known about the latter, though historian Denis Gifford has referenced it as a "series of joke cartoons redrawn from the magazines Judge andLeslie's Weekly."
Gillett had been with Hearst’s failed International Film Service studio at its 1916 inception, so it seems likely that as Hearst moved the production of the cartoons elsewhere, Gillett and his peers simply followed. In the mid-1920s, Gillett would join Dick Huemer, Manny Gould, and Ben Harrison to form Associated Animators, an ambitious but unsuccessful effort at producing animation via the artist-supported United Artists model.
Gillett would go on to manage the Van Beuren studio in the mid-1930s. He remains infamous for his unstable behavior while in charge there: displaying a wild temper and firing employees without warning. Gillett apparently suffered from bi-polar disorder, although we don't know whether it also manifested itself during his early years with Bray.

The one-shot Debut of Thomas Cat (general release Feb. 20, 1920) was for many years regarded as the first color cartoon. Earlier examples have turned up in modern times, butThomas Cat remains the first color cartoon to have been widely distributed. The short was processed by Brewster Color of Newark, New Jersey, a company run by Percy Douglas Brewster (1883-1952), a 1905 Cornell alumnus.
The Brewster Camera Company formed in 1906, when Brewster left Cornell and met fellow inventor Hoyt Miller (1883-1957), a Harvard graduate and color chemist.  Brewster and Miller developed and patented the first commercially viable camera capable of capturing natural colors, albeit in a two-color form.  Fame came to the company when the Royal Society of London cited Brewster's work; later, Brewster was the first to shoot a color photograph of President Wilson. Brewster's camera took two negatives: one sensitive to red light, the other to green, with a half-mirror being used to split the the white light to two negatives. The two negatives were processed onto black and white photographs, toned red and green appropriately. Then the two elements were combined, with the red images and the green images superimposed on a single sheet of paper.
Starting in 1916, Brewster filed for several patents that would form the basis of the Brewster Color Motion Picture Co.  Brewster applied his still-photograph method to 35mm motion picture film, utilizing two strips of film in a specially-built camera that recorded both red and green light simultaneously.  The next step required a new duplitized (two-emulsion) film stock that Kodak had put on the market the previous year. The red negative was printed on one side of the stock; the green side on the other, with each toned red and blue-green respectively.  This technique would remain the primary method for natural color printing during the 1920s, and became the staple of the more successful Prizma Company.
Green: Project Print or Video
Gray: Print Known Elsewhere
Red: No Known Print