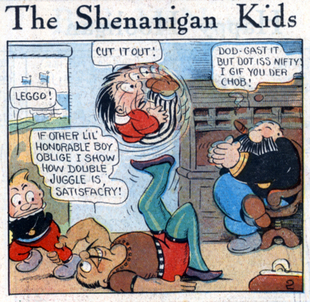 "Vot der dumboozle?" With the IFS agreement came the rights to the Katzenjammer Kids, the unruly brats who had already lasted 22 years in comics at the time. Unfortunately, the Katzies were deprived of one rather essential feature - their name!
During World War I, excessive anti-German fervor led to a change in the Katzenjammer Kids comic strip. The strip's ongoing continuity showed the fiercely Teutonic Captain Katzenjammer complaining about his Germanic surname, alleging that he and his family had in fact always been Dutch, not German. In June 1918, the heavily accented clan visited a lawyer and formally changed their surname to Shenanigan. Sons Hans and Fritz became Mike and Aleck.
Alas, while these alterations may have vaguely boosted morale, they may have led audiences to confuse Harold Knerr's comic strip with many bootleg Katzenjammer imitations of the time. By early 1920, the Katzies were the Katzies again, this time without an explanation.
Even harder to explain is why the Bray Studios used the name "Shenanigan Kids" for its Katzies cartoons even after the strip had reverted to its original title! Evidently quite unsuccessful, the Bray/IFS "Shenanigan" shorts only lasted for three episodes. It would be left for MGM to reignite the Katzenjammers on screen in the late 1930s.