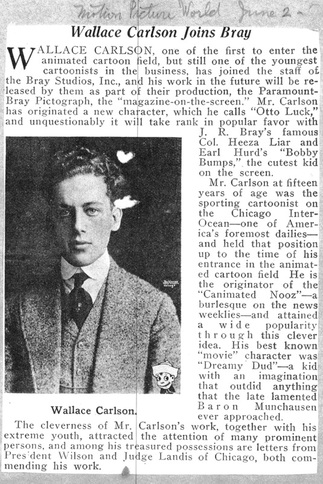 Wallace Carlson, like most Bray artists, contributed comics to newspapers in the early years of the 20th century. Carlson's first animated cartoon, JOE BOKO BREAKING INTO THE BIG LEAGUE (1914), won him a distribution deal with Essanay Film Manufacturing Company, where he continued the Boko cartoons and came up with a new series, the Canimated Nooz Pictorial. Essanay was also where Carlson created "Dreamy Dud," a little boy who enjoyed typical childhood mishaps with his dog Wag. DREAMY DUD, HE RESOLVES NOT TO SMOKE (1915) is one example that is very easy to view today.
In 1917, Carlson began working for Bray and created the Otto Luck and Goodrich Dirt (1917-1919) series. We are aware that one Otto Luck cartoon survives, but we have not yet viewed or copied it for the Project. Several Goodrich Dirt cartoons exist; the character is a clownish-looking bum usually in search of free food, an easy job or a one-night stand. [Copyeditor Dhave disagrees, but...]
In 1919, Carlson began the Us Fellers series, where he reused Dreamy Dud, now calling him simply "Dud." In some Fellers films, the boy's full name is alternately given as Dudley Perkins and Dudley Dunkins. Wag and Dud's love interest, Mamie, also appear. The Us Fellers characters were also featured in HOW ANIMATED CARTOONS ARE MADE, a comedic "documentary" that Carlson created for Bray in 1919. MADE may have been the first film of its kind; Carlson hosted it on-camera, taking his slapstick lumps when one scene showed him thrown out of the boss' office.
Carlson's Bray cartoons are notable for their use of heavily detailed backgrounds, a far cry from the simple pen and ink drawings in Carlson's Essanay cartoons. The action in Carlson's Bray films, while not overly fluid, is compensated by the impressive visual appearance and shading of the scenes as a whole.
Carlson left Bray to animate The Gumps in the early 1920s, which--interestingly enough--harked back to Carlson's Essanay days its its use of unshaded, if elaborate, artwork. 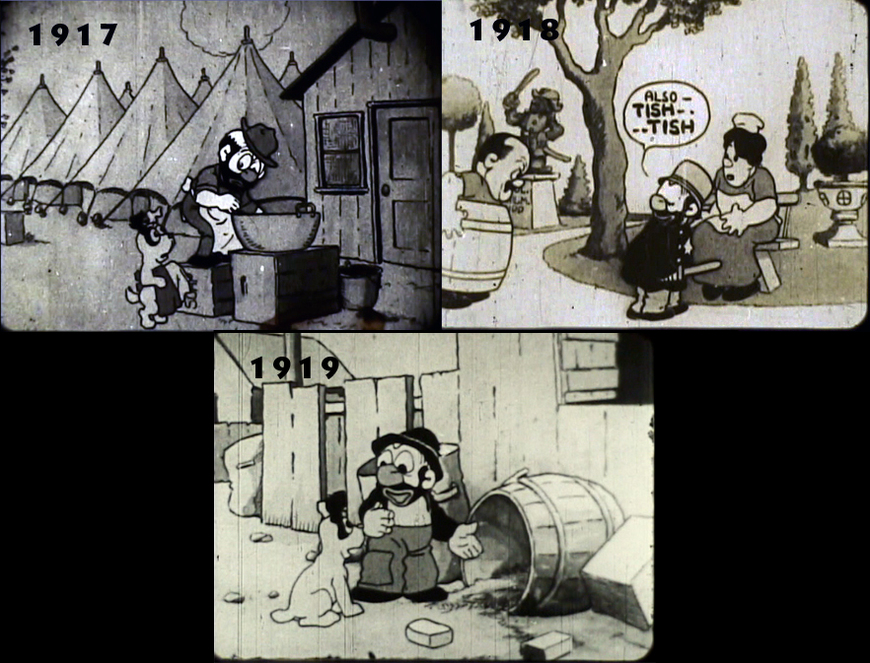 How Animated Cartoons Are Made (1919)