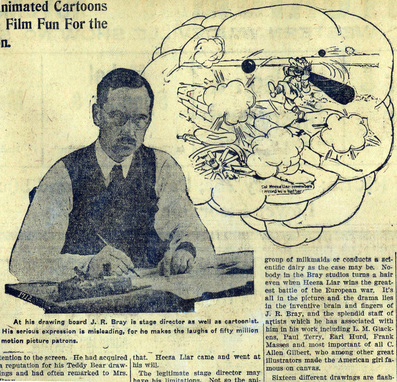 J. R. Bray often reminisced glumly about his first animation project. This involved attempting to adapt his "Little Johnny and the Teddy Bears" comic strip to the screen. Apparently, much work and toil was invested in this project, but the effort was futile. Bray was attempting a form of filmmaking that did not—as yet—enjoy the availability of instruction booklets or guidelines, as animation has today. To put this into historical perspective: the "Teddy Bears" comic series was running in 1907, the same year that an Edison stop-motion film called The "Teddy" Bears (directed by Edwin S. Porter) was released. We do not yet know whether Bray's "Little Johnny" strip predated this film; but it is likely that Bray viewed the film and was inspired by it to animate his comic characters. Bray was toying with an art form that no one really knew how to execute; ultimately, he could not animate his strip characters to his satisfaction.
Bray did, however, go on to create a pioneering cartoon called The Artist's Dream (Pathe 1913). Winsor McCay's Little Nemo (1911) and How a Mosquito Operates (1912) had already been released at the time Dream was made; Bray attended vaudeville performances by McCay, in which his cartoons were interpolated as part of the act. Bray's resulting film combined McCay's vaudeville byplay with Bray's own desire to bring his comic characters to life.
Dream utilized a dachshund as its animated subject; a breed of dog Bray evidently felt close to, as dachshunds were also the stars of his early "Die Dackels" and "You've Gotta Stop Kicking Us Dogs Around" comic strips. The animated segments of The Artist's Dream were brief, but Bray managed to create extremely fluid animation as well as to imbue his dog character with a crucial quality--personality, as shown in the dachshund's movements, facial expressions, and story-driving gluttonous desire. Dream was extremely popular with audiences, and it won Bray a contract with the Pathe distribution firm for more animated cartoons. Following The Artist's Dream came another landmark in film history: Colonel Heeza Liar, the first cartoon character to feature as the recurring protagonist of a series.
Bray animated the Heeza Liar cartoons almost single-handedly for the first few years of the series' run; Bray also had a hand in animating and directing several other cartoons throughout the 1910s. The following filmography represents this latter group: non-series cartoons in which the animation itself is credited to, or likely to have been done by, J. R. Bray personally.

Above: Newspaper portrait of J.R. Bray alongside a Col. Heeza Liar illustration (1916).