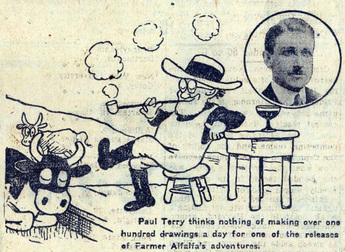 Paul Terry produced Farmer Al Falfa cartoons at Bray throughout 1916. Born in San Mateo, California in 1887, Paul grew up idolizing his older brother John, a newspaper cartoonist. Starting his own newspaper career in 1904, Paul Terry would draw at least once—over the next nine years—for just about every paper in San Francisco. He also drew briefly for for the Portland Oregonian in 1908.
Moving to New York City in 1913, Terry found work on a committee that designed streetcar advertisements, as well as drawing for the New York press. Sometime in 1914, Terry attended a presentation of Winsor McCay’s Gertie the Dinosaur at Reisenweber's, a New York cafe. Inspired by the screening, Terry began pursuing the new art of animation himself. In 1915 Terry completed his first film, Little Herman, and applied for a patent on his own animation process. Alas, his first meeting with a potential distributor was famous for its negativity: Leo Selznick told Terry that the film stock he had used would be worth more without his cartoon images on it! Luckily, Thanhouser Film Corporation agreed to distribute Little Herman; Terry then produced a second short, Down On Phoney Farm, which was released on October 16th, 1915. Unfortunately, Phoney Farm has not been available for viewing, but it was most likely the first cartoon depicting Terry's farmer character.

Above: Newspaper illustration of Farmer Al Falfa with a portrait of Terry (1916) 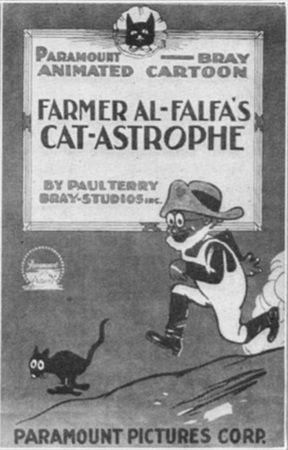 Terry’s desire to remain an independent producer was halted by Bray and his wife. Terry‘s patent had not yet been approved, but his technique involved cel animation—carried out under the noses of Bray and Earl Hurd, who had patented the technique. Seeing one of Terry's films advertised in the paper, Mrs. Bray recruited Terry by telling him that Bray would shut him down unless he came to work for them.
As a result, Terry’s tenure at Bray began under unpleasant circumstances. He directed eleven Farmer Al Falfa cartoons for Bray between February and December of 1916, then left to resume working for himself. Bray and Terry seem to have had a bit of a feud, as they later clashed again—this time in court—when Terry refused to contract with Bray-Hurd for the cel techniques used at his Aesop’s Fables studio. However, Bray and Terry appear to have made up at some point, as they were photographed together in the 1960s, and Terry professed an admiration for Bray in a 1970 interview.
Immediately after leaving Bray, Terry produced at least one more Farmer Al Falfa cartoon (Farmer Al Falfa's Wayward Pup; Conquest Pictures/Edison, 1917), as well as a series of "Terry Cartoon Burlesques" and "Terry Human Interest Reels" for the A. Kay company, including an ambitious parody of 20,000 Leagues Under the Sea. However, the artist's progress was halted when he entered World War I.
Terry returned to civilian life in 1919 to produce some Farmer Al Falfa cartoons for the Paramount Magazine before forming Fables Pictures, Inc. and producing about 430 Aesop's Fables cartoons from 1921 to 1929, a truly amazing feat. Terry split from the Fables studio shortly after the onset of sound; his next studio, Terrytoons, went on to become one of the major animation studios, as well as one of the longest-lived among its contemporaries.
Farmer Al Falfa appeared in new cartoons well into the 1950s, then enjoyed ample exposure on television where hundreds of silent and sound Farmer Al Falfa cartoons were shown through various distribution packages. Quite a career for a character whose only real personality trait was peevishness—and whose schtick centered around animals playing him for a fool.                                - Charlie Judkins (with Tommy José Stathes)

Right: Period poster for one of the Farmer Al Falfa cartoons as reproduced in a 1916 issue of Paramount Progress. Courtesy Robert Birchard.