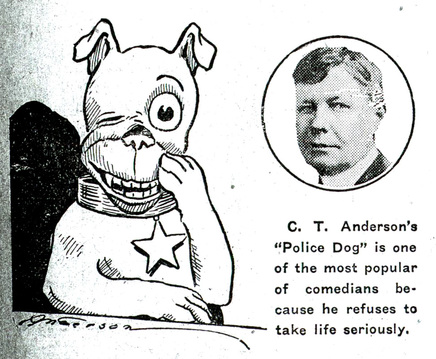 Carl Anderson, referenced as C. T. Anderson during his Bray days, was a first-generation Norwegian-American born in Madison, Wisconsin in 1865. Anderson may very well have been the oldest staffer to rise to prominence at Bray; at the time he began directing at the studio, he was approximately 48 years old, fourteen years older than J. R. himself. Anderson is said to have been at the studio at the time of its incorporation.
The Police Dog series with Anderson's main project at Bray. Pinkerton Pup, as the dog was otherwise known, could be counted on to get human Officer Piffles in trouble. Originally a relatively realistic dog, Pinkerton became more anthropomorphic over time. The series ran intermittently from 1914 to 1916.
Known prior to his Bray career for such comic strips as "The Filipino and the Chick" (!), Carl Anderson went on to create the famous Henry pantomime strip (from 1932), the accomplishment for which he is best-remembered today.


Left: Segment from 1916 newspaper article on the Bray cartoons.