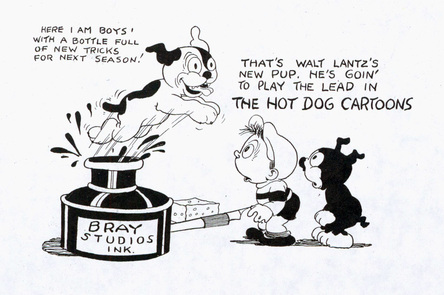 Walter Lantz began producing the Pete the Pup cartoons as a replacement for Dinky Doodle; Dinky's companion series, Unnatural History, carried on uninterrupted.
The Pete cartoons utilized a similar format to both Dinky and Unnatural History: live action combined with animation. In the films, the animated Pete the Pup lives in a large, three-dimensional dollhouse located in Walter Lantz's home. Narratives in the Pete cartoons are not much different from those in the Dinky cartoons; and one could say that Pete is simply Dinky in a dog costume. The smart-alecky Pete alternately heckles and is heckled by the live-action Lantz.
The last Pete cartoon, released May 27, 1927, wrapped up not just the Pete series but the entire era of Lantz's tenure at the studio. More importantly, it marked the last commercial release of an entertainment-based animated cartoon from the Bray Studios. J. R. Bray, sensing that audiences were growing tired of cartoons, surmised there was no lucrative future in the industry and shuttered his animation department.
Walter Lantz went on to bigger successes; directing Oswald the Lucky Rabbit after Disney's loss of that character, then finding fame for producing series such as Andy Panda and Woody Woodpecker. Lantz outlived all of the other major Bray directors and passed away in 1994.