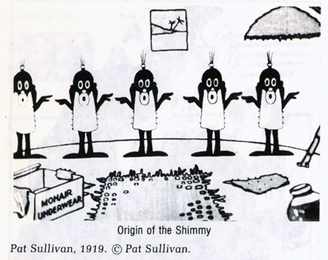 Australian film producer Pat Sullivan (1887-1933), often assisted by head animator/director Otto Messmer (1892-1983), was one of many famed silent cartoon makers to provide Bray product. In Sullivan's case, however, not a lot of that product was actually made for Bray.
In 1918-19, Pat Sullivan's studio standby was the "Charlie" series, a group of animated Chaplin pastiches produced initially for Universal. For as-yet-unknown reasons - perhaps Chaplin rights issues - Sullivan split from that studio; though the Charlie shorts continued on an independent basis, they were suspiciously rebranded "Charley" now, and new product avenues were sought.
One was Bray, for whom Sullivan and Messmer created a new character in mid-1919. Developed for the Paramount-Bray Pictograph, "Hardrock Dome" was a detective hero whose three adventures had a unique feature for the time - they constituted a genuine three-part serial, with the perils of Hardrock and his assistant Doc Walloper picking up where they left off from one week to the next.
Several months after the Hardrock saga, Sullivan produced one more cartoon for the Pictograph: "Getting a Story or the Origin of the Shimmie." But the handwriting was on the wall. When Paramount and Bray split up, Sullivan and Messmer stayed with Paramount - and it was for the subsequent Paramount Magazine that the Sullivan studio's greatest character, Felix the Cat, came together as a solo star just over a month later.

Above: Still from Getting a Story or the Origin of the Shimmie (1919)