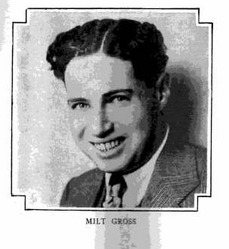 Milt Gross (1895-1953) was already a veteran of nearly a dozen newspaper comic strips at 22 years of age when he announced his entry into “the free-lance game” in April, 1917. He had just quit his office boy / cub cartoonist job at the NY Evening Journal after Arthur Brisbane, the legendary Hearst editor, refused his request for a raise in salary.
The enterprising youngster immediately set up a makeshift studio in the back room of a Bronx pool parlor and was soon contributing cartoons to Judge and The NY Globe, among other venues. Gross had first dabbled in the animation field a bit earlier, picking up the rudiments of the craft at the Barre-Bowers Mutt and Jeff Film Studio, headquartered just blocks away from his parent’s home in the Bronx. When he departed from the Journal that Spring he had already written, directed and animated his own short film for producer Patrick Powers.
The Ups and Downs of Mr. Phool Phan, the first known film to carry Gross’ credit; was released by Universal on March 27, 1917 and based on the misadventures of a henpecked devotee of the sporting life that he had created at the Journal two years earlier. The film played widely (the strip itself had been syndicated to a number of major markets) and received (at least in exhibitor’s ads) some notable billing.
Gross was employed as an animator at a small Times Square commercial studio when received his draft notice on June 5th. He served in the US Army and saw action with the 7th Div. in Alsace-Lorraine, France returning to NY shortly after the Armistice in Nov.1918.
Stateside he made the job rounds while still in uniform and quickly hustled a daily continuity strip about a war orphan in America (Frenchy) to the NY Evening Journal & Tribune Syndicate. However by Fall, 1919 this timely idea had evidently run its course and Gross once again returned to animation, this time at the J.R. Bray studio, then the largest in the field. At Bray, Gross served as a staff animator and created a score of his own short films featuring such diverse characters as Frenchy, Prof. Fuller Prunes, Izzy Able the Detective as well as Ginger Snaps- an early “spot gag” format series, which were released as part of the Goldwyn-Bray Pictograph through 1921.
The two surviving Goldwyn-Bray subjects (both date from late 1919) preview some familiar hallmarks of Gross’ later work. We’ll Say They Do (like his 1931 wordless book She Done Him Wrong) satirizes Victorian-era stage melodrama clichés with its muscle-bound bumpkin hero bumbling his way through the pitfalls of the big city, as the inevitable mortgage comes due back home. The cartoon ends with the ironic catchphrase “In the movies they do it!” a direct reference to one of Gross’ most popular Journal strips. Tumult In Toy-Town presents a romantic rivalry between two toy soldiers and introduces an impish black cat that would soon appear as a mascot in many of his NY World strips of the early 1920s. (Gross would briefly return to this concept in a 1923 Sunday feature entitled Toy Town Tots).  Both shorts were competently executed by Bray standards and display nascent hints of Gross’ mature cartooning style as well as his manic cynicism.
Newly married in the winter of 1920 (The Bray studios bestowed the newlyweds with a full set of silverware), Gross expanded his income by contributing both stories and animation to such recently established cartoon studios as the Fleischer brother’s Inkwell Films and Paul Terry’s Aesop’s Fables, both spearheaded by recent Bray alumni who had struck out on their own. For reasons that are not entirely clear, Gross was abruptly terminated from his position at Bray on Christmas eve of 1921, a month after the birth of his first son, Herbert.
This incident; in his own estimation, led directly to Gross’ first “big break” on Pulitzer’s NY Evening World and within a few short years worldwide celebrity as a syndicated dialect columnist, cartoonist, illustrator, screenwriter and ultimately author of a dozen books of humor. Echoes of Gross’ animation background can be discerned in much of his subsequent work and he never let his ties to the industry grow too cold. The cartoonist briefly returned to Bray in 1922 for 3 Ink Raving cartoons for The Bray Magazine and continued to pursue a number of (unrealized) animated projects in the late 1920s and early ‘30s. After his great successes on the printed page, Gross would once again return to the cartoon business with numerous projects at such Hollywood factories as MGM, Screen Gems & The Walt Disney Studio. 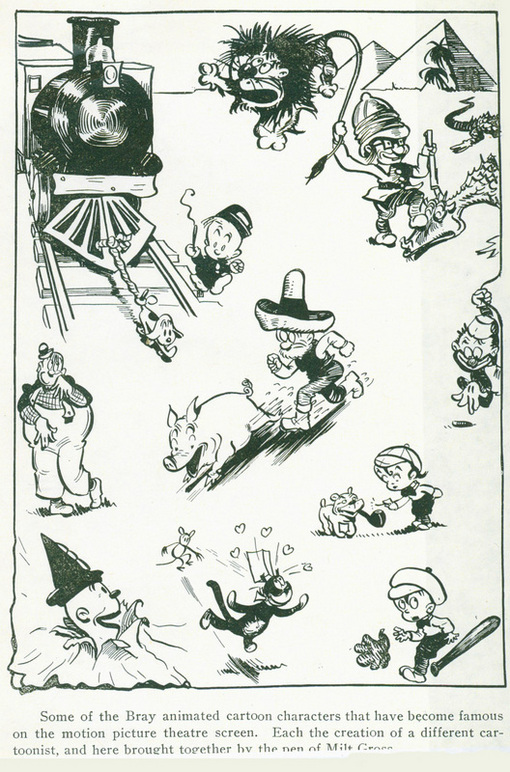