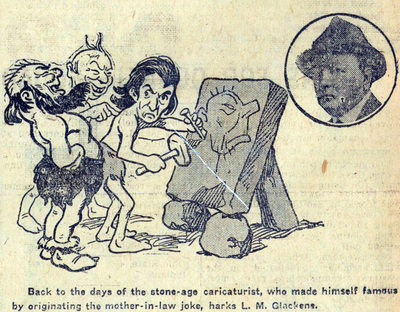 Louis M. Glackens (1866-1933) was born in Philadelphia and began his long career as an illustrator and cartoonist for the newspapers of that city. Louis was the elder brother of William J. Glackens; the renowned ashcan painter and member of “The Eight”- and chairman for the selection of American art for the historic 1913 Armory show, where Louis’ own paintings were hung as well.
Louis first began contributing his comic drawings to Puck in the early 1890s and eventually became one of its most prolific contributors, creating innumerable covers, centerspreads, cartoon panels and proto-comic strips for the venerable comic weekly (and it’s many annuals, compilations and offshoots). His work also appeared in such contemporary periodicals as Cosmopolitan, Munseys and the NY World, Evening Mail and Tribune. Commissions included advertising drawings and illustrated books of humor and children’s stories. The industrious freelancer entered the burgeoning animation industry in Spring, 1915  (coinciding with Puck’s change of hands, downsizing, and eventual demise).
Often billed as “The Famous Cartoonist” in the main titles, Glackens seems to have animated chiefly for Bray (some sources have put him, uncredited, at Barre, Pathe and Sullivan studios), releasing 22 titles through late 1920 (though apparently absent the studio in 1917). Many of his shorts (including the Haddem Baad caveman series) were satiric modernizations on historical themes in the venerable Puck tradition, while some (such as Jack the Giant Killer and What Happened To Willie) were fanciful fairy tales framed in a relatively straightforward manner. A number of others (such as Our First Flyers and Our Bone Relatives) hewed closely to Bray’s scientific info-tainment genre, complete with static diagrams and animated pointers.
In later years Bray’s own assessment of Glackens’ work at his studio was decidedly negative. He told animation historian Mark Langer in 1975 that Glackens was “no good” (as an animator) and “he didn’t last for me too long”, although he did acknowledge Glackens’ proficiency on the printed page. Perhaps Glackens’ most notable legacy at Bray was the design of the studio’s iconic “Jester and Do-Do Bird” mascots featured in the short’s main title cards and advertising beginning in 1916, and who were still in the public’s eye well into the 1960s via Bray’s TV prints.
Glacken’s best known work today however remains a series of drawings he created beginning in the late 1910s (extending through the early1930s) delineating the ever-expanding product line of this childhood friend; Samuel Sorenson Adams (originator of such icons of American ingenuity as the Whoopee cushion and Joy Buzzer). His expressive drawings graced the pages of The Johnson Smith Company’s novelty catalogues for generations and have been preserved by the S.S. Adams Company of Asbury Park, NJ where they are still at work in that company’s catalogues, advertising and packaging.

Above: Drawing from a Glackens cartoon done at Bray Studios with an image of the artist (1916).
Below: Special thanks to Larry Groebe for the 1915 image.