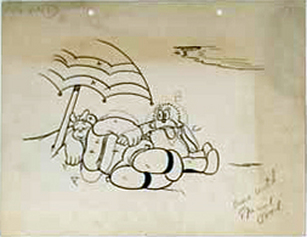 Cartoonist Thomas "Tad" Dorgan (1877-1929) was a one-man cottage industry in his day, producing a long-lived group of newspaper strips that included "Indoor Sports," "Daffydils," and "Silk Hat Harry's Divorce Suit." The latter, one of the more unusual strips ever to become a hit, featured the eponymous top-hatted dog in comedic courtroom drama. Several years were milked from the back-and-forth between henpecked Harry, his domineering wife, and the real star of the strip, wisecracking Judge Rummy - who, when away from the bench, had his own battleaxe spouse to deal with.

As early as 1911, Harry was granted his divorce; not long after, Judge Alexander Rumhauser became the strip's official lead character, with domestic stories turning on his philandering and other bad habits. Harry, as the Judge's too-clever-by-half best buddy, dropped in to make situations worse.

Bray's Judge Rummy cartoon series followed the pattern - but did it with style, structuring its plots as catastrophes that built. In HIS LAST LEGS, Harry has opened a women's shoe store and has a "fitting screen" through which modest ladies can anonymously stick their legs. When Harry entices the Judge to come check out the view, it's hard to know where Rummy receives more punishment: from the modest ladies themselves, or from his wife - who inevitably drops by to see how his eye is wandering. In YES, DEAR, Rummy builds a ventriloquist's dummy of himself with a parrot stowed inside - the idea that while he goes out to chase single women, the dummy can talk back to his wife at home. While Mrs. Rumhauser might not be the sharpest tool in the shed, she knows "Alecthander" isn't quite himself today.


Above: Production drawing most likely from Beach Nuts (1922). Special thanks to ASIFA-Hollywood Animation Archive.